See more details in description below

The history of this beautiful Burst.

The former owner bought this guitar from an unknown musician back in 1969 in Copenhagen Denmark. Together with his father they went out and purchased this guitar for around 550 USD. The former owner always wanted to get a Gibson Les Paul. That was simply his dream-guitar. At that time he played in a Danish band called; “Benzon’s Railroad” The band played Beat, Rock and blues music and existed from 1967 to 1972. Over the years the former owner could see that his Gibson became a high value guitar,  for which reason he kept his guitar in secret and safe place for many years without playing it. He feared that someone would find out, that he was the owner of this very expensive guitar. Even his family was not allowed to touch his guitar or even mention its existence to anyone. So this Gibson is a very uncirculated guitar with the same owner for over 50 Years. To find a Gibson Les Paul Burst that have been nearly uncirculated is a sensation and especially in Denmark. Very few Gibson guitars were sold in Denmark in the 60’s compared to the rest of the world. So this is a great example of a real barn find.

We present a historical  piece we got directly from the owner.  This is an original and early 1960 Gibson Les Paul Standard. The Gibson Les Pauls from 1958-1960 are some of the most sought after musical instruments in the world and they are absolutely fantastic.

This 1960 Gibson Les Paul in its original Cherry Sunburst finish has faded and turned into a beautiful ” Honeyburst” finish. Excellent condition for its age. The original cherry color remains under the pickguard, plastic pokerchip and pickup cavities which is exactly what you want to see. Overall, this beauty has all the original 59′ specks (neck is a 59’ neck profile) which also makes it an early 1960 and makes this guitar very valuable. Serial number: 00198

The original finish on the front and back is totally untouched and completely original. The guitar has no breaks or repairs on the guitar-body and neck. The headstock is in great shape with only minor cosmetic wear. The silkscreened gold script ” Les Paul” on the headstock is faded a little but the gold color is still very strong. The gorgeous mahogany back still appears with a very deep cherry red with not much fading. There is very minor beltbuckle-rush on the back.  The guitar has a book- matched top with graded figured maple (“burst”). Most of the burst shading has faded on the lower bout of the body.

The original frets are used but overall in very nice condition and there is plenty of life left in them. The guitar comes complete with its original and super rare “double whites” PAF. These pickups are the holy grail, they are strong with a great output and sounds amazing. The previous owner took off the original covers back in 1969, because this way you could get more “sound” out of the guitar. So there are redone solder on the control cavity. He kept the original PAF covers and they are included with the guitar. Since the covers have been off, some of the solder are touched including in the control cavity. The original pots and original Bumble Bee caps are still there and are in perfect working order. The plastic pokerchip around the original toggle-switch is replaced a repro, because it was broken, this is often seen on many Burst. The jack output plastic plate and the yellow switch knob has also been changed.

Original tailpiece, original ABR-1 bridge with its original saddles. The original Kluson single ring are in okay shape, but they has shrunken which is very common. I recommend changing them to original (reproduction parts) and then keep the original tuners in a box.

This “BURST” has a fantastic weight, so much resonance in the body when you play it acoustic. Overall, this is just a STUNNING Gibson Les Paul standard.

Comes with its original Gibson hardshell brown case with pink lining. Handle and latches are in perfect order.  Additionally,  you also get a photo from 1971 of the former owner playing with his band “Benzon’s Railroad “ and an original flyer from the band. 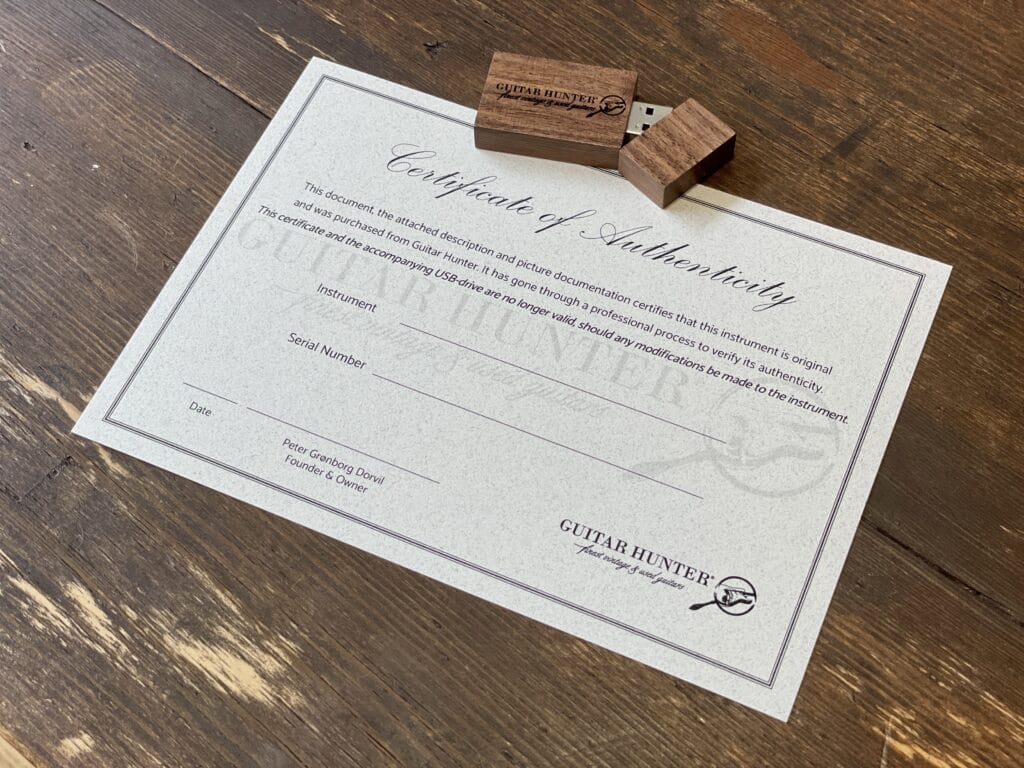 With your purchase you get picture documentation on a USB drive and a Certificate of Authenticity. Read more